A cost to benefit analysis of railroad electrification

The FRA recently released a technical report entitled Cost Benefit Analysis of Rail Electrification for Next Generation Freight and Passenger Rail Transportation, created as part of the recent, and terrible, Keystone West corridor study. Aside from generally being a whitewash of a preordained outcome, it contains an error so blatantly egregious that I have to question how it ever made it past any form of peer review.

4.2.2 Energy Costs
In order to determine the energy cost differences, the team estimated fuel costs per mile for both the build and no-build options. In the build option, trains would consume electricity; in the no- build option, trains would continue to consume diesel fuel. For both options, the team estimated the costs of 10 trains traveling a 75-mile round trip every day. For diesel-powered locomotives, it was assumed that the rate of consumption was 1 gallon of diesel per 3 miles traveled. For electricity-powered trains, the assumed rate of electricity consumption was 0.03 miles per kWh.


Three miles per gallon is an inversion of reality and likely stems from confusion of switching units back and forth given that they give an electrical consumption in odd form of miles per kWh. In reality, Amtrak quotes 2.3 gallons per train-mile, Metrolink gets 2.6 gallons per mile, and the Class 222 Meridian gets about 2 gallons per mile. So rather than $1.27 per train-mile, at their assumed cost of $3.80 per gallon, it would be a cost of $7.60-9.88 per mile, far above the cost of electric propulsion.

For that matter, the electricity consumption figures are on the higher end. The British Class 390 Pendolino and IC225 consume about 22 kWh per mile, though it must be admitted that the double length Class 373 consumes 66 kWh per mile and that 31-33 kWh is a good approximation for a 200m high speed train. This analysis was for a high speed alignment, which would make the high speed train's figures appropriate, but I'm not overly fond of apples to oranges comparisons.

An interesting peculiarity of this paper is that at least two of its citations, footnotes 18 and 19 from page 20 where this section is found, do not at all state what this report claims to use them for. Indeed, it's actually impossible to derive the energy consumption figures that they claim to as Amtrak's reported figures are total train-miles, total diesel consumption, and total electricity consumption: There is no distinction of diesel train-miles from electric train-miles.

So let's try our hand at creating a cost to benefit analysis of railroad electrification, specifically of existing corridors without any new high speed alignments. The costs, as provided by this analysis, are fairly reasonable and I don't have any quibble with them. These amount to $12,100 per route-mile in annual maintenance costs and $4.3 million in construction costs per route-mile or $176,515 annually over 30 years with a 1.4% discount rate for a total annual cost of $188,615.

Per the EPA, Tier IV locomotives have the following emission factors in terms of grams per brake horsepower per hour:


With a conversion factor of 20.8 to grams per gallon for large line-haul and passenger trains we have the following emissions per gallon:
Per route-mile, each bidirectional frequency (one train in each direction) has this consumption:

Using the median 2014 South Coast Emission Reduction Offset transaction costs as a proxy for the social costs of diesel emissions, and therefore the social benefit of eliminating them with electrification (assuming 100% clean energy), gives us this:

Considering just the social benefits, maintenance is paid for with 3.5-4.5 daily frequencies. This alone does not justify electrification in most corridors, however, as it would require 55 frequencies, five times the current level of the Pacific Surfliner, to justify solely on environmental grounds. As we established earlier, however, electric propulsion is quite a bit cheaper than diesel propulsion; for a corridor intercity or commuter train with consumption of 22 kWh per train-mile, we can expect a cost of $2.42 per train-mile, $5.18-7.46 cheaper than diesel.

Again, maintenance is very quickly paid for: 2-3 frequencies will pay for the maintenance, but construction costs require rather more: 32-47 frequencies. Combined, we see that it takes 21-29 bidirectional frequencies for benefits to match the costs of railroad electrification.

For freight trains, the decreased fuel costs play a much larger role, and more importantly, the only one that the board of directors actually care about, resulting in break even at fewer frequencies. From the 2014 STB R-1 reports, we see that, for the Class I railroads, there is an average consumption of 6.92 gallons per train-mile; a comparable figure for electric traction would be 86.5 kWh per train-mile. Because of the significantly greater fuel consumption, the pay off is much quicker: Only 9 trains per day are needed in each direction with social benefits included or 15.4 when only considering fuel costs.

Of course, private companies aren't going to be using Federal discount rates and will likely be seeking money on the open market. While this will be more expensive, it won't be enormously so. Union Pacific recently sold 40 year bonds at 3.875%; if I've done the math correctly, this would come out to $212,374 per mile of track, pushing the break even points to 10 and 17.3 frequencies. In Southern California, this would justify the electrification of the Alameda Corridor, Sunset Corridor, and Southern Transcon (slide 9). 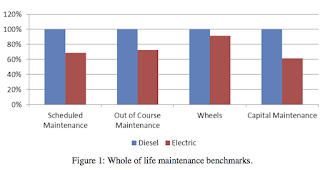 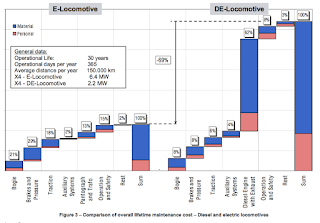 Referring once again to the R-1 reports, we see that there are 2.63 locomotive unit miles for every train-mile, or to put it another way, the average train has 2.63 locomotives, and that it costs $1.65 per locomotive unit mile, which comes out to $4.34 per train-mile. At the low end, electrification saves $1.30 per train-mile for every freight train that passes through and that's without any consideration of the potential need for fewer locomotives with electric trains. For commuter and intercity trains, assuming that they have similar maintenance costs to freight trains, the savings would amount to $1-2 per frequency depending on whether they have a single locomotive or are double ended, such as the British IC125 or All Aboard Florida's new trains will be. This reduced maintenance cost doesn't amount to overly much, only $730-1,898 per frequency per year for every electrified mile, but on busy corridors it can quickly add up. Just over six freight trains per day in each direction will offset the maintenance costs of the electrification for instance and sixteen would account for the maintenance costs on commuter and intercity lines.

But what of the price of the locomotives? The original study quotes a price of $7 million for Amtrak's new ACS-64, a price of $2.6 million for diesel locomotives and proclaims itself happy: The comedy of errors continues. In reality, Amtrak is paying $6.66 million per locomotive and $2.6 million for a diesel passenger locomotive is simply laughable. Amtrak may have paid $2.4 million for the P-42s back in 1996, but inflation's been a touch more than $200,000 over the last 20 years and Metrolink is currently purchasing EMD's F125 for $6.84 million each, including 20 bought at an option price of $6.295 million.  For intercity trains, Siemen's Charger, purchased by several states and All Aboard Florida, is coming in at $7 million each, the same price the analysis was quoting for an electric locomotive. If anything, based on actual prices paid, it would be cheaper to choose electric locomotives. It must be admitted, however, that SEPTA is paying significantly more, $8.6 million per locomotive, for their ACS-64s. This may be the result of only a single bidder (thanks to Buy American requirements) and purchasing of spare parts that were not purchased by Amtrak as part of their ACS-64 contract.

For Tier 4 freight locomotives, I have yet to come across anything giving an actual number. California's Air Resource Board estimates $3 million per locomotive, which is a fairly significant increase over the $2.3 million per unit that Florida East Coast spent acquiring its ES44C4s. While $3 million per unit is cheaper than $4.3 million for Bombardier TRAXX or $5.125 million for Siemens Vectron, it must be kept in mind that the electrics also have significantly more power: 7,500 horsepower for the TRAXX and 8,600 horsepower for the Vectron against the 4,400 horsepower of the ES44C4 or EF44AC (the Tier 4 replacement). Additionally, these are significantly faster locomotives: American diesel-electric locomotives are typically limited to about 75mph while the TRAXX is rated for 87mph and the Vectron, in its standard configuration, is built for 100mph; if the speed is not considered worthwhile, it's likely that they could be built for a lesser price. Be that as it may, it's worth considering that, for horsepower limited trains, a Vectron can replace diesels on a 2:1 basis and a TRAXX can replace them on a 3:2 basis. In such case, the electrics are cheaper to purchase than the corresponding number of Tier 4 diesels, by about $500,000-1,000,000 dollars and will save more than a hundred thousand dollars a year in reduced maintenance costs simply from requiring fewer locomotives, before even consideration of the lowered maintenance costs of the electrics.

There are three final issues which negatively impact the costs and benefits of electrification. The first is that of clearing sufficient overhead to install railroad electrification: Not every place is the wide open plains and tunnels, overhead passes, or other environmental issues may result in substantially higher costs for particular stretches of track. This must be evaluated, however, on a case by case basis, rather than simply trying to throw in a blank figure for every bit of electrification that may be done.

Second is the fact that oil prices, and with them the cost of diesel, have plummeted since the original study was created. While I have used the original numbers, and I fully expect the price of oil to return to its highs within a decade, the financial benefit from lowered fuel costs is currently significantly lower than what I've gone through above using the original numbers.

Lastly, there is the issue of operational flexibility, to which I cannot attach a number. Electric locomotives must stay on electrified track and cannot be detached for duty elsewhere unless, as some versions have, they possess an auxiliary diesel engine, at the cost of reduced range and speed. The increasing use of distributed power by freight trains means that switching between diesel and electric power can be a costly and time consuming affair. Again, this is not something I can quantify financially and would need to be evaluated, by professionals, on a line by line basis.

On the other hand, this does not also evaluate the increased speed, acceleration, and frequencies which electrification may make possible and which would make train service more attractive than other modes. Frequently these are the overriding benefits which decide the case for commuter and intercity rail electrification but, at the risk of growing repetitious, these would need evaluation on an individual basis.
Posted by Paul Druce at 3:06 PM

Email ThisBlogThis!Share to TwitterShare to FacebookShare to Pinterest
Labels: Electrification