Surfliner to increase its bicycle capacity

I delayed in reporting March's figures and luckily it turns out that it was a good thing as the agenda for the May 2nd Technical Advisory Committee explains the downturn and gives some interesting other information.

The Surfliner's six month ridership increase was broken in March, but this may not have been an actual decrease. Apparently "This decline appears to be an anomaly in Amtrak’s reporting system due to e-Ticketing reconciliation," though I'm not entirely certain as to how that works and am open to suggestions. It does lead me to believe that April will be a return to the growth that we have been seeing over the past year.

More notably, Caltrans is working on increasing the bicycle capacity for the Surfliner, bringing it to 13 bikes per car, to be completed by July or August. This is accompanying the $5 charge and mandatory reservations for bicycles starting in June revealed with the new schedule. Hopefully there won't be any SNAFUs related to the Amfleet train set on the Surfliner (though this may be part of the reason for Comet cars on the San Joaquin).

With that in mind, this does have the potential to be a major revenue earner for the Surfliner. Assuming no bicycle capacity in the cafe car and one of the coaches is a Superliner, there should be room for 50 bicycles on board. Even if, on average, each train carries only 25 bicycles over its entire journey, that would still result in about a million dollars of revenue for the Surfliner, decreasing the total public subsidy required.

Note that Metrolink ridership is up on the Orange County Line, but down on the Ventura County Line.

Email ThisBlogThis!Share to TwitterShare to FacebookShare to Pinterest
Labels: LOSSAN

Using Amtrak's FY2012 data, and somewhat inspired by Mike Hick's spreadsheet,  let's take a gander at how much it costs Amtrak to move a single seat a single mile.

As Mike Hick noted, there is some weirdness with certain routes that appear to have a percentage of their miles charged to the Northeast Regional instead (though note the oddity of the Downeaster's costs when it doesn't use the Northeast Corridor while the Washington-Newport News trains do). Aside from that however, there a few things that we can see.

Firstly, there is the unsurprising fact that running one or two coaches per locomotive (as is the case with the New Haven-Springfield Shuttle and the Heartland Flyer) is rather expensive. These two routes should be converted to diesel multiple units as soon as practical. High costs for the Adirondacker and the Cascades are probably related to border crossing and carrying Talgo maintenance representatives respectively. Incidentally, I would not be surprised if, should the Hoosier State indeed be retained with state support, its performance improves remarkably. As a state supported service, Amtrak would be required to credit the Hoosier State and Indiana with revenue appropriate to the cost of hauling cars to and from Beech Grove, something I strongly suspect does not currently occur.

Rather interestingly, there doesn't appear to be much if any cost difference for using bilevels instead of single level equipment. However, this could simply mean the greater capacity of bilevels is used to allow shorter train lengths or that the cost difference is wiped out by using allocated costs.

Unsurprisingly, sleeper service and dining cars on the long distance trains result in a significant increase in costs. The Silver Meteor is 38% more per seat-mile and the Silver Star 54% more per seat-mile compared to the all coach Palmetto running along most of the same route. Using this consist list and this site for car capacity figures,  the Palmetto has 311 seats plus diner and baggage car while the Meteor and Star possess 236 coach seats and 90/60 sleeper "seats" as well as diner, lounge, and baggage making them a good point of comparison. Similarly, I am unsurprised at the high costs of the Acela. It has a small number of seats, a high level of service, and probably some rather extravagant energy consumption costs.

Now, the long distance trains do somewhat better on a passenger mile basis.


While they aren't all near the bottom, and a couple of trains do outperform them, on average the long distance trains cost less than other trains per passenger mile. This is strictly a function of occupancy however. Cheap trains with few passengers are more expensive in that metric than are expensive trains that are well filled. 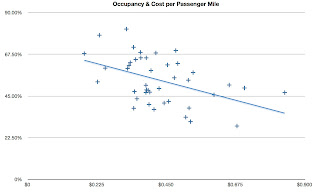 Honestly, what this really tells us is that Amtrak and the various states, especially California, need to put far more money into advertising corridor services. Taking the example of the Pacific Surfliner for parochial reasons, a 60% increase in passenger-miles would be easily within the capacity of the existing equipment, would drop the cost per passenger-mile below every long distance train, and would result in  the the train running close to break even.

Lastly, there is what I think of as the "Making the effort" line

Every train which is less than 100% has its ticketing currently priced such that even if every seat were sold out for the entire journey at the current average fare per seat-mile, it could not possibly make back its costs. Note that this includes every long distance sleeper train. This is not an inherently bad thing: Subsidized rail service as a public good is a perfectly acceptable goal. It is, however, distressing to see every luxury long distance train in that category, especially the Auto Train, which does not have to concern itself with occupancy issues due to passenger turnover.

There's another matter which should address itself to our attention and to the defenders of the long distance trains as they currently stand. The Palmetto, which is all coach as we know, has an average ticket yield of 20.1¢ per passenger mile. This is rather intriguing because it ties it for second alongside the Crescent for highest yielding long distance passenger train after the Auto Train despite the fact that it possesses no sleeping passengers. With an average trip length of 436 miles, these aren't short little jaunts either, but are comparable to the long distance coach trips of other trains. This strongly suggests that the coach fares of the rest of the long distance network could stand to be raised by 50-100%, gradually of course, but raised sharply nonetheless. This would also raise the price of sleepers by several cents per mile, of course, as they pay a basic rail fare, but that's hardly objectionable and would help to improve the financial performance of the train.
Posted by Paul Druce at 11:21 PM 16 comments: