New joint bilevel car contract to be awarded to Sumitomo


The California Department of Transportation (Caltrans) on behalf of the departments of transportation from Illinois, Michigan, and Missouri issued a Notice of Intent to Award today to Sumitomo Corporation of America to design, build, and deliver 130 bi-level passenger railcars for use in regional intercity rail corridors in California and the Midwest. The Notice of Intent to Award does not signify that a contract has been awarded but that a potential vendor has been identified.
Sumitomo Corporation of America submitted a bid of $352,276,000.
“By pooling our resources, all four states involved in this partnership can purchase the equipment at lower costs because it will be acquired in high volume under one contract,” said Caltrans Director Malcolm Dougherty. “These new railcars will help us meet the growing ridership demand on California trains, which is up 53 percent since 2002.”
Caltrans and the Illinois Department of Transportation will first conduct a federally required Buy America pre-award audit to verify assembly locations and manufacturing facilities for railcar components. Buy America rules require that all 130 new bi-level cars be assembled in the United States, and that all the major components must be manufactured domestically. The audit will be forwarded to the Federal Railroad Administration prior to the contract award. Sumitomo Corporation of America will also be required to submit insurance policies and performance bonds. A fully executed agreement is expected to be in place by mid-November.
...
California will receive 42 railcars, while the Midwest Coalition, consisting of Illinois, Michigan, and Missouri will receive 88 railcars. Railcars delivered to California will be used on the three state-supported intercity routes, the Capitol Corridor (Sacramento area-Oakland-San Jose), the San Joaquin (San Francisco Bay Area/Sacramento-Bakersfield/Southern California), and the Pacific Surfliner (San Luis Obisbo-Los Angeles-San Diego). The Midwest Coalition will use its new railcars on the following corridors: Blue Water (Chicago-Port Huron), Wolverine (Chicago-Detroit-Pontiac), Pere Marquette (Chicago-Grand Rapids), Illini/Saluki (Chicago-Carbondale), Lincoln Service (Chicago-St Louis), Missouri River Runner (St Louis-Kansas City), Illinois Zephyr/Carl Sandburg (Chicago-Quincy), and future services between Chicago and Dubuque and Chicago and the Quad Cities, with potential extension to Iowa City.
...
The first railcars are slated for delivery in the fall of 2015, with the final car expected to be delivered in early 2018.

Happily, this represents a substantial cost savings from the original funding amount, with a per car cost of $2.7 million saving $200 million from the total grant awards. Hopefully that savings will be rolled into extending the production lines and ordering more cars in order to increase capacity on various routes (as well as to remove all Superliner, Horizon, and Amfleet cars from California).

Compared to the only recent bilevel coach order I could find, for Israel Railways, there's a half million dollar price premium for the American cars, however this may be an artifact of adding additional cars to an order already in process. An earlier order was for $2.5 million per car in 2010 and that represented a major cost savings of 15-20% from yet an earlier order. Presumably a similar process is possible with these new cars.

While browsing through old LOSSAN meeting agendas, I found out that Amtrak used to give ridership information by station pair. Unfortunately, FY2005 (September 2004-September 2005) appears to be the last year that it was given for, in this meeting. 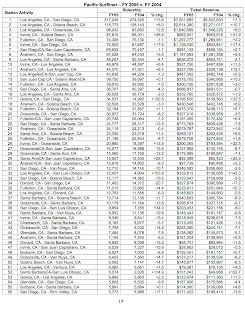 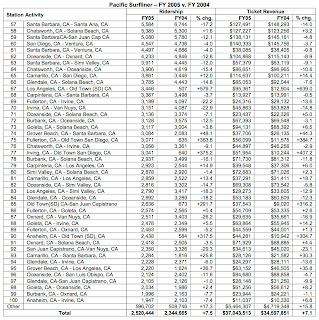 One important note is that Los Angeles may be overrepresented due to a need to transfer there for a number of trains. Acknowledging that as a potential issue, a quick run through the data shows that the Surfliner Express' schedule would suffice for 974,840 of the 2,520,444 passengers that year, of whom 2,100,954 were traveling solely on the southern portion of LOSSAN between Los Angeles and San Diego (though what looks like a significant majority of those traveling to points north do so from or to stations south of Los Angeles).

Beyond that I don't have any remarks right at the moment other than to wish that this information was still made public on a regular basis.
Posted by Paul Druce at 4:35 PM 2 comments:

Email ThisBlogThis!Share to TwitterShare to FacebookShare to Pinterest
Labels: Surfliner

Four of 14 Chinese HSR lines break even, including debt payments


BEIJING ( Caixin Online ) — Four of the nation’s 14 high-speed rail lines have financially broken even since bullet trains started full-speed, intercity service in China two years ago, giving impetus to a Ministry of Railways expansion.
Passenger ticket revenues have so far matched expenses — including debt payments — for the busy Beijing-Tianjin, Shanghai-Nanjing, Beijing-Shanghai and Shanghai-Hangzhou lines, a source at the National Development and Reform Commission (NDRC) told Caixin.
Moreover, the financial health of the Beijing-Shanghai line exceeded expectations during its first operating year, which ended in June, sources told Caixin.
The ministry has declined to release financial data, but said trains whisked 52.6 million passengers between the two cities during the 12-month period. Ticket sales on the line brought in 1.86 billion yuan ($293.4 million) in July 2011, Caixin learned from other sources, and about 7 billion yuan between June 2011 and January.
This and other noteworthy financial data reflects the popularity of fast-rail tripping in relatively wealthy eastern China, where some people now choose bullet trains over airliners and business travelers abound.
Passenger cars on bullet trains in other parts of the country, such those traveling the Zhengzhou-Xi’an line, are emptier and apparently underperforming financially. Some may be losing significant sums of money.
Only about a dozen trains a day travel the Zhengzhou-Xi’an high-speed railway, for example, compared to 65 fast trains a day running between Beijing and Shanghai. A lighter schedule on a given line means less revenue for servicing debt.


Beijing-Tianjin has been open for four years, Shanghai-Nanjing and Shanghai-Hangzhou both for two years and Beijing-Shanghai for only one. Rather interestingly, the 65 trains per day between Beijing and Shanghai are reported to have an occupancy rate of 72%, which is fairly substantial, especially in such a short time frame.

It should be noted that the interest rates on the loans are so low as to effectively be grants; the article reports that Beijing-Shanghai route borrowed approximately 110 billion yuan on a 20 year loan with interest of about one billion yuan a year (the first five years of which the banks waived the interest). At an interest rate of about 0.9%, that's well below inflation and is simply a veiled form of subsidy, even if it does pay back a large portion of the capital invested in it.

While the article does paint a rosy picture, it could be read as a rather poor picture of health for the Chinese high speed rail network, with 70% of its network failing to break even. On the other hand, it's only a few years in for these lines, some of which are not yet fully completed, and even if they do not break even, that does mean that they are not economic positives for China and financially positive for Chinese railways in particular. High speed rail has a higher cost recovery than does conventional rail and by removing passenger trains from the current mixed network and separating it into dedicated freight and passenger lines allows for a simultaneous major increase in freight capacity as well (Amtrak's trains are apparently the equivalent to 3-4 freight trains in terms of slot requirements). More capacity means more freight revenue, which is always substantially higher than passenger revenue, and so a net gain even if the HSR line itself does not fully cover its own costs. This is not applicable to high speed rail schemes in the United States however.

Posted by Paul Druce at 9:37 AM No comments:

CA may go to STB to force the Daylight on UP

Buried at the end of a fairly routine story on the Coast Daylight comes this rather interesting tidbit:

According to SLOCOG Board of Directors President and Paso Robles City Councilman Fred Strong, if the agencies can’t make any progress with Union Pacific within the next three months, the issue may be kicked up to the state Surface Transportation Board, which could enter the process as a third-party arbitrator.
Rodgers said everyone on board is pushing to have the project on track by Spring 2015.

It will be interesting to see if they do end up playing hardball with Union Pacific over it. If they do, and the STB forces the Daylight on Union Pacific, passenger rail with not only UP but the other major railroads should see a minor boost, if for no reason other than simple fear of having a heavy burden laid upon them by the STB, whether realistic or not.


Part of the newly built Harbin-Dalian high speed railroad connecting Northeast China's Heilongjiang, Jilin and Liaoning provinces is now facing reconstruction due to roadbed deformation, an expert said on Tuesday.
Wang Mengshu, chief engineer of the China Railway Tunnel Group and academician of the Chinese Academy of Engineering, told the Global Times that certain parts of the railroad were not initially designed properly.
"In regions where the temperature varies greatly around the year, frost heaving becomes a major problem in construction," said Wang. "Designers need to pay extra attention to the amount of water in the roadbed. Too little water reduces roadbed strength, while too much water could cause deformation."
Wang said a certain part of the Harbin-Dalian line, the first of its kind in Northeast China, was designed to avoid building tunnels for the purpose of reducing cost, causing the railroad to travel through ravines where rain water can easily accumulate and damage the roadbed.
An anonymous expert from the Ministry of Railways made similar comments and added that 70 percent of the ballastless track, a type of track specially required by high speed lines, was built on a viaduct to help drain water. Some 20 percent of the track built directly on the ground roadbed has seen different levels of deformation, reported Economy & Nation Weekly on Sunday. The Harbin-Dalian high speed railroad is currently the northernmost high speed line in China with temperatures dropping to as low as -40 C in the area.
The railroad line is 904 kilometers long and cost 92.3 billion yuan ($14.51 billion). Construction started in August 2007 and was completed on December 28, 2010, according to Xinhua.
A previous report from the Heilongjiang-based news portal nbw.cn said the railroad was expected to open for operation by the end of this year. However, an employee from the Harbin-Dalian High Speed Railroad Company told the Global Times that the date is not yet known.

While there have been significant issues with Chinese industry in the past, including the astoundingly poor operational issues after signal failure that led to their fatal high speed train crash, I wouldn't necessarily place this problem in the same category. It is somewhat questionable that an engineering failure in the design of the route itself could be made to this degree, encompassing about 55 route-kilometers, but it is within the realm of possibility that the engineers were either unfamiliar with the degree to which the problem existed in this area, it was an unforeseen consequence of the construction itself, or that it was foreseen and overruled by higher ups for political reasons.

On a tangential note, I discovered while writing this that public transit information for intercity train travel is available for China on Google Maps, which was rather surprising, especially given that it is not yet available for many European countries. Oddly, it does not appear to include high speed trains however.
Posted by Paul Druce at 12:25 PM No comments: