Acela II is the path towards Amtrak operational self-sustainability

The Northeast Corridor, stretching from Boston to Washington D.C., has traditionally been Amtrak’s greatest revenue sector. Within the Corridor, it has been the premium higher speed services, starting with the Metroliners and continuing on to the current Acela trains, which have been the only Amtrak trains to consistently earn more revenue than it cost to run them. Last year, FY2013, the Acela carried 3,343,143 passengers for a total revenue of $542.7 million, an average of $162.33 per passenger. It took $297.3 million to operate the service, leading to a $236.9 million operational surplus; reducing Amtrak’s operational loss for the year by a third.

The forthcoming Acela II isn’t just supposed to be significantly faster than the current Acela service, cutting 24 minutes from the scheduled time between Washington and New York and 38 minutes between Washington and Boston, but it will also represent a significant boost in capacity. The current Acela trains run with a total of 304 seats, 44 first class seats and the remainder in business class. The “Next Generation Trainset” RFP calls for a nominal total of 425 seats, at least 15% of which are first class. This is a 40% increase in total seating and a 45% increase in the number of first class seats. These are vitally needed seats for Amtrak as one of the largest problems with the Acela is its lack of seating despite heavy demand. At an average of 84 cents per mile in FY2013, fares on the Acela are on a per passenger-mile basis, one of, if not the highest, fares in the world for a high speed train.

With an increase in seating capacity, Amtrak will be able to garner significantly more revenue, even if it lowers the price of Acela seating somewhat. This added revenue comes with no significant increase in operational cost and quite possibly a lowered cost, as there should be a higher rate of availability and lowered mechanical costs for what is essentially an off the shelf train, along with significantly lower energy consumption. With current averages for occupancy and passenger revenue unchanged, an Acela II train service could see $742 million in revenue, with $447 million in operational profit.

This will have an even larger effect upon Amtrak’s financial deficit than initially appears because starting in FY2014, the states bear a greater responsibility for the short distance train corridors. This had the affect of reducing Amtrak’s FY2014 budget request to only $373 million for the operating grant; 2013’s appropriation, by contrast, was $442 million.

Amtrak’s request for proposals provides for a possibly significantly greater increase in capacity and revenue however. Included with the proposals, Amtrak wants a pricing option for delivery of two additional business class cars for each trainset in 2025-2030. If exercised, this would push Acela II onto the edge of being a billion dollar per year service as it would add about 130 seats per train with current Acela business cars as the model. Personally I find myself disappointed that the option is for a delayed delivery rather than for a prompt inclusion with the initial train sets; aside from slightly different wear rates and how that may complicate maintenance, earlier delivery means greater revenue potential for Amtrak.

In addition to greater capacity of the individual trains, three of the four alternatives which Amtrak is requesting information for in the proposals involve additional frequencies of Acela service. The first is perhaps an “if all else fails” alternative, requesting trainsets in order to add peak hour half-hourly service alongside of the current Acela fleet. Somewhat confusingly, it refers to “6 additional Trainsets to operate alongside the existing Acela. Offeror should state the number of Trainsets needed for these additional 6 services.” I believe, but may be mistaken, that this is a poorly worded statement which means that there would be six additional daily frequencies rather than six additional trainsets. Alternative #3 is much the same, except for involving the complete replacement of the Acela fleet (Alternative #2) in addition to the peak-hour half-hourly service. The final alternative asks for sufficient trainsets to operate “the 25 services needed each day outlined in Phase 2 of the Operating Plans,” plans which were not included in the RFP documents unfortunately. Given some of the phrasing in the document, I believe that this refers to 25 trainsets operating each day. With Amtrak operating 16 trainsets per day with the current Acela fleet, this is a major increase (56%) in operating sets and frequencies. While this will increase operating costs, revenue on the Acela is sufficiently high that it is extremely unlikely that the additional frequencies will not positively contribute to Amtrak’s financials. 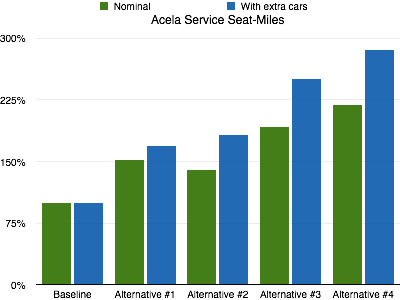 What the NextGen HSR procurement comes down to is a potentially gigantic increase in premium service availability in the Northeast Corridor. At its most expansive, with 25 operating trainsets each with two additional business class cars, there will be a 185% increase in seat-miles, nearly a tripling, and this is without consideration of whether reduced maintenance requirements (or better maintenance practices) might allow for full weekend service. While this would be unlikely to result in a tripling of revenue, it should still result in a substantial increase in revenues.

In order for Amtrak to completely break even on an operational basis just thanks to the Acela, the operational surplus would need to more than double. While this is perhaps doable, it is unlikely in the near future. What is likely however is a substantial drop in Amtrak’s deficits. This drop in deficits makes makes it easier and more likely to convince Congress and the states along or near the Northeast Corridor to subsidize Amtrak operations, extensions, and capital investment. It also puts Amtrak on a firm path towards breaking free of a reliance upon Federal largesse for its continued existence and with it a more profound freedom to pursue a high quality passenger train network.

A copy of the RFP documents may be found here.
Posted by Paul Druce at 8:44 PM 3 comments: