At the upcoming 7/9/2015 Technical Advisory Committee meeting, LOSSAN is providing an update on the Pacific Surfliner's ridership and for those of us with an interest in some of the nuts and bolts of the data, it's like Christmas in July. Unfortunately it doesn't have all the information one might want; the station-pair information is vague rather than specific as LOSSAN used to receive a decade ago and as the Capitol Corridor is currently releasing, but it does continue great information nonetheless; in particular, the average monthly ridership per train, broken down into coach and business, is quite possibly unprecedented.

It's a bit unfortunate that the ridership doesn't show the values, but luckily it's possible to extract it. I've also included a daily ridership figure in order to better show off 761/1761 and 790/1790 which are the only two frequencies which receive separate numbers for running on weekdays and weekends.  I'm a bit mystified, honestly, by that, since there are other trains which have separate weekend timings, but don't receive a different number for it. For the purpose of this, I've assumed an average month has 30 days, 8 of which are weekends.

I've also redone the chart to join the weekday and weekend trains, making it quite apparent that the 790/1790 pair performs significantly better than the original chart makes it appear. 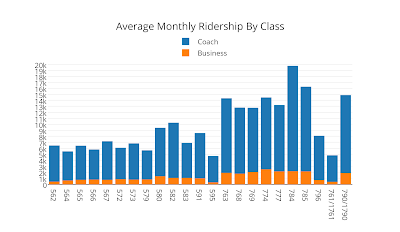 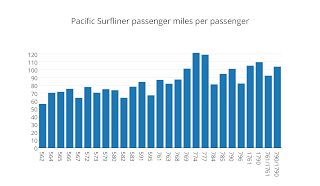 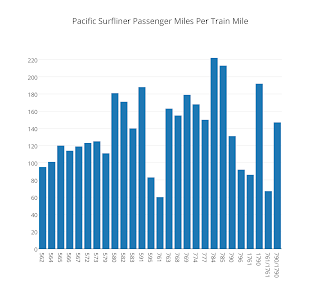 And, of course, here's the information for that in spreadsheet form:

So what are some conclusions we can draw from this?

First and foremost, 761 (and the weekend 1761) are absolutely abysmal. This is the current northbound Coast Daylight slot and one hopes that there would be a significant increase in traffic when it is actually extended to San Jose or San Francisco as the Coast Daylight (eventually, one day, quite possibly just a few minutes before the universe dies of heat death). That's not necessarily an unreasonable proposition, 790/1790 is the southbound counterpart and is an above average performer. It's probably a case of leaving Los Angeles too early in the morning without a correspondingly significant destination to arrive at.

Amtrak has been suggesting the past year that the Coast Daylight would be better off running from San Diego to San Jose rather than Los Angeles to San Francisco. At the same time, LOSSAN has been looking at an early morning from San Diego using existing equipment. It seems pretty obvious that 761/1761 should be extended to be an early morning (approximately 5:00 AM) departure from San Diego, picking up commuter traffic and possibly some early morning business and theme park travelers, before continuing on its current low performing route. I honestly don't expect it to pick up too much additional Amtrak traffic, the Surfliner's primary market being leisure travel, though Metrolink monthly pass holders would likely be quite pleased with it, but it's worth the experiment: As it is, with the current Surfliner average yield of 28¢ per passenger-mile, and an estimated $35 per train-mile in marginal operating expenses, 761/1761 currently covers about half of its running costs, possibly less as it is significantly below the average for business class use as well. The first three departures from San Diego are above or close to break even and the first departure, which also heads continues north of Los Angeles, is the best performing of them. If it averages the same as the current 500-series trains (which run only between San Diego and Los Angeles), which is just over break-even under the above assumptions, it would mean an additional 82,900 annual riders and $1.67 million in revenue for the Surfliner.

There's also good reason to believe that continuing to extend the current 500-series trains north of Los Angeles will result in improved ridership and revenue. These full (or "fuller," depending on how you wish to consider San Luis Obispo as part of the Surfliner) length runs are 29% more productive, in terms of passenger-miles per train-mile, than are the 500-series trains, and have average trip lengths 25% longer, something that shouldn't be too surprising since the corridor is nearly doubled by the extension to Santa Barbara. LOSSAN should continue to improve the locally owned portions of the line north of Los Angeles, terminating at Chatsworth with a new layover facility for as many trains as possible if need be, while pushing for improvements by Union Pacific to the Santa Barbara Subdivision.

Lastly, I have a chart created on a bit of a whimsy that I'm not sure actually shows anything terribly significant except that the first and last trains of a day underperform (which may undercut the rationale for a 5:00 AM San Diego departure) and possibly that people want to take a train around meal times. With Los Angeles as the top station for the Surfliner, and being the origin or destination for 21% of passengers, I looked at the productivity (in terms of passenger-miles per train-mile) for trains according to when the train arrived or departed Los Angeles. It would be better, of course, to have the information as to how many passengers are actually on board a train during any given hour of the day, but I'm not sure even Amtrak has that information, at least not without a rather laborious process of collection.